Zesco United Women’s Football Club emerged as winners in yesterday’s Four-team Mini Tournament hosted by Nkana Women’s Football Club played at Nkana Stadium in Kitwe. Zegalicious were a team on fire as they picked up maximum points in their first two matches edging Kitwe Girls Academy 3-1 and went on to silence Nkana Queens 2-0 before battling to a Goalless draw with Runners-up Indeni Roses in their last match to take their tally of points to 7 from the 3 matches played. Runners-up Indeni Roses started on a higher noteRead More

Cote D’lvoire 0 – 0 Cameroon The Les Elephantes were yesterday held to a goalless draw at home by the Indomitable Lionesses in the Tokyo 2020 Olympics Qualifier 1st Leg of the Fourth Round played at the Parc des Sports de Treichville in Abidjan. Going into this match Cameroon was a more favorable side especially having had an upper edge over the Ivorians in the previous 3 meetings with the Indomitable Lionesses Triumphed in all rounds. Before this round, Cameroon managed to eliminate DR Congo via a 5-2 aggregate winRead More

Zambia U23 national team played to a goalless draw with South Africa in their U23 AFCON opener on Saturday. The ZamFoot Crew now brings their rating of the players based on their performance on the day. Mangani Banda 5/10 – The skipper was solid in goal. He had a couple of nervous moments when he came off his line but failed to deal with crosses. One grave error when distributing almost cost the team Shemmy Mayembe 6/10 – Defended well and did not let many passes on his side. WasRead More

Fashion off to Egypt

Zambia U23 national team striker Fashion Sakala is on his way to Egypt to join his Zambia U23 national team (team) mates. The KV Oostende forward confirmed his departure for Egypt on his Twitter account. GOD BLESS US🙏🏿🙏🏿Proud to be called for national team 🇿🇲 EGYPT see you in few hours ✈️ We are chipolopolo boys🔫🔫FS10 DREAMS DON’T DIE 💪🏿💪🏿👊🏿Read: Deuteronomy 20:1-4🙏🏿🙏🏿 pic.twitter.com/GupLKSLTdI — fashion jr10 (@jnrsakala) November 10, 2019 Sakala was on target yesterday as KV Oostende played to a 2-2 draw with Royal Excel Mouscron ending their fiveRead More 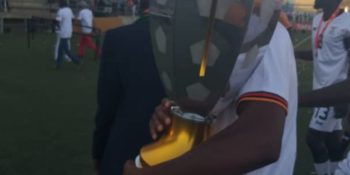 The national men’s team this afternoon lifted the 2019 Dr Geingob Cup after beating hosts 2 – 0 at Sam Nujoma stadium. President Hage Geingob handed over the trophy to Zambia’s team captain Adrian Chama at the end of the tournament. FAZ General Secretary Adrian Kashala and Zambia’s Ambassador to Namibia Stella Libongani were in the terraces cheering on the local based players. Assistant coach Osward Mutapa said the match acted as preparation for the CHAN tournament that features locally based footballers. A brace by Emmanuel Chabula saw the CHANRead More