?> Zambia captain overcome with joy after COSAFA U17 triumph | ZamFoot

Zambia captain overcome with joy after COSAFA U17 triumph

Zambia Under-17 National Team captain Miguel Chaiwa has expressed happiness with the 2019 COSAFA U17 triumph.

Chaiwa has also heaped praise on the team’s technical bench for a role they played in the team’s triumph, describing them as hardworking.

“I would like to thank God for the wonderful talent and trophy which he has given to us. And also want to thank our hardworking Technical bench, they have been advising us to continue with the same spirit,” he said.

He further appreciated Mozambique for a great game despite losing concentration in the second half and said this was the time for them to unveil their talents.

“I would also want to appreciate our opponents they did well in the first half though they lost concentration in the second half,” he said.

“We have been training hard since may and this was the time for us to showcase our talents,” he added.

Chaiwa said, winning a trophy feels good and is an inspiration to others’

“Winning a trophy feels great and it’s an inspiration to other guys who would want to play for the National Team.”

Peter Chikola was sent off after being booked for a second time but this deficit did not worry the team and Chaiwa feels that it acted as a Motivation because their opponents underrated them and they left up to the Coache’s Instructions.

“It gave us motivation, our opponents underrated us because of the red card but the Coach told us to play the ball around the field to destroy them and we did just that.”

The Junior Chipolopolo edged The Young Mambas of Mozambique 2-nil to be crowned as 2019 COSAFA U-17 Men’s Champions while Angola was 3rd placed after they silenced Eswatini 5 goals to nil.

Zambian forward Moses Mulenga was named Player of the Tournament, while Iford Mwale walked away with the Golden Glove as Best Goalkeeper.

A trio of Simon Cipriano from Mozambique, valdemiro Dominos from Angola and Rickson Zambia’s Ng’ambi shared the Golden Boot as joint top goalscorers with 5 goals each.
Eswatini claimed the Fair Play prize.

Sharing is caring! Click on the icons below to share with family and friends.
Men's U-17 National Team No Comments » 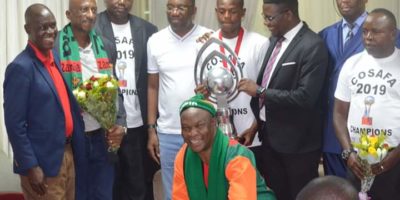