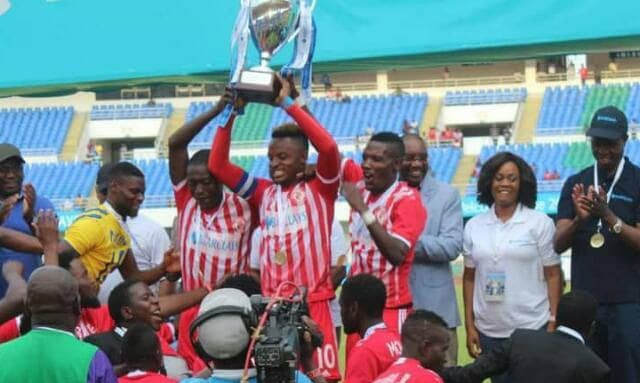 Nkana made easy work of Young Buffaloes to claim their first ever Barclays Cup title. The Wusakile based out-fit put three past the lower tier side to claim an emphatic victory.

Both sides started on a lively note with both teams playing an open game. The early stages saw chances for both sides with Young Buffaloes rushing their shots on both occasions.

Nkana lived up to their favourites tag as they broke the deadlock eight minutes into the match, Ronald ‘ Sate-Sate’ Kampamba the landlord of Wusakile heading in a cross from Walter Bwalya to make it one nil.

Young Buffaloes re-organised almost immediately and started pushing for a goal. It was Nkana however who almost doubled their lead but Kampamba’s first touch failed him as he only forced a corner after some good work from Walter.

Sate-Sate could not be denied for a second time as he headed in a Jacob Ngulube cross for his second of the afternoon to make it two nil for Kalampa.

Nkana were running riot and almost made it three but Kelvin Mubanga’s long range effort could only hit the woodwork.

Coach Josephat Mulenga brought in fan favourite Nerbert Musamba three minutes to half time to try and push for a come back.

In the second stanza Nkana picked up were they left off and turned the afternoon a nightmare for the Young Buffaloes side as Walter Bwalya added Nkana’s third.

Kampamba nearly completed his hatrick but his header went wide off target.

Sate-Sate seemed to have taken off his scoring boots as he missed another sitter with only the goalkeeper to beat.

It was all Nkana at this point. Walter could have had too quick goals in the dying minutes but his first strike went off target then the second chance found him a few inches offside .

3-0 the match ended as Nkana claimed the much deserved silver ware to end want has been an impressive season for Beston Chambeshi and his men.

Saturday’s victory meant that Nkana took their haul of trophies to 44, while it was a second individual winner’s medal for coach Beston Chambeshi, who previously won the competition with Power Dynamos in 2011.

Meanwhile, Young Green Buffaloes coach Josephat Mulenga was voted the coach of the tournament, with his midfielder Abeauty Simanzuwo as the player of the tournament. Both walked away with K15,000.00 each in prize money.

Nkana skipper Walter Bwalya was the man of the match, and he walked away with K5,000.00 and a one year hospital cover plan from Barclays Life.

Next season the competition will be called the Absa Cup.

« FC Muza awarded three points over abandoned match (Previous News)
(Next News) Generally we (Zambians) are too kind! Sven urges his players to be more nasty on the pitc »