Red Arrows and it’s feeder teams have continued to work hard in producing quality youngsters like defender Peter Makoni, Alick Phiri Jr, and many others.

The Airmen’s latest youth team project which started back in 2016 seems to be bearing fruits now with a number of the players currently playing in Provincial Division One and the Eden University/FAZ National Division One.

One such player is the red hot Blue Arrows forward Moses Sondashi who seems to have found the formula for scoring goals.

The ZamFoot Crew caught up with the former Chisamba United player to talk about his football journey this far. A story full of unfortunate circumstances, perseverance, and determination, the true ingredients of the Sondashi formula.

Sondashi narrated how he missed out on a trip to Europe because it coincided with him reporting to Hillcrest National Technical high school.

“Well I started playing football at an early age, the time I was in primary school I would even sneak out of class to go play football (laughs). My parents were against me playing football especially my father he wanted me to concentrate on my education,” Sondashi narrated to the ZamFoot Crew.

“I started playing organized football at Chisamba United, started developing as a young player and was selected for the junior national team U-17 where I mate the likes of Peter Makoni who’s currently my teammate at Blue Arrows. I then moved to Livingstone joined Live Bullets Academy played there for some time.”

“Then came a project for the Swindon Town football club of England who came to tap young talent in Zambia and I was selected to go to Europe but unfortunately didn’t go because that very month I needed to report for school at Hillcrest national technical high school,” he added.

After the disappointment of failing to travel to Europe because of School, he returned to football after completing School but another disappointment was waiting for him as he failed to be registered by KYSA because of a problem with documentation.

“After completing my high school I went back to Lusaka and then attended trials at Red Arrows U-19, got selected and became part and parcel of the Arrows Family,” he said.

“Kabwe Youth came calling, Noah Phiri was head coach by then. I trained with the team days before the Barclay’s cup playoff. I was told to submit my details by Chairman Mr. Mutangama(May his soul Rest in Peace)days later I was called by the chairman saying my details were incomplete and that very day registration was closing, so I had to return to Red Arrows reserves where I was Captain at that time,” he added.

The young striker seems to be on the good side of luck for once and he is banging in goals for fun at Blue Arrows.

Sondashi says he is working hard to help Blue Arrows secure a place in the Eden University/FAZ national division one and hopes to one day play for Super League teams like Red Arrows, Zesco United, and Zanaco.

“Am now playing with Blue Arrows in Livingstone with 7goals to my name this season..am hoping and praying that I can help the team get a slot into the National league we are currently number 3 in Division one,” he said

“I am working very hard so see myself play for super League teams like Red Arrows, Zanaco, Zesco United, or Napsa. And one day represent my country at the senior level. I also have a dream of one day playing in Europe,” he added.

Like the saying goes Go confidently in the direction of your dreams. Live the life you’ve imagined, Sondashi may soon just pop up at a Super League side because of his talent, determination and hard work.

« Queens among 13 academies to be analyzed by FIFA…As Kavimba opens up on development plans (Previous News)
(Next News) Thomas Mubita: A teenage sensation who loves winning promotion » 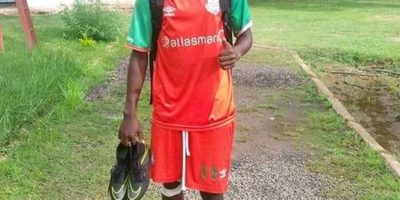 One Comment to The Sondashi formula: Determination, hardwork, and perseverance