Justin Shonga scored a first half goal to help Orlando Pirates to a 1 – 0 away win against Golden Arrows that keeps their title hopes firmly alive.

Shonga was named in the starting line up for Pirates while the other Zambian in the Pirates team Augustine Mulenga started on the bench.

He found the back of the net in the 20th minute when he received a ball in the box on the right, shifted it to his left foot to curl it past Gumede in goal.

He could have scored a second goal late in the game but missed his chance with only the goalkeeper to beat.

Mulenga was introduced in the 90th for Mahachi.

This was the 22 year old’s 5th goal in the league in 21 appearances.

The win moved Pirates into second position on 39 points, one point behind Kennedy Mweene’s Mamelodi Sundowns who have a game in hand.

Sharing is caring! Click on the icons below to share with family and friends.
Justin Shonga, Players Abroad 2 Comments » 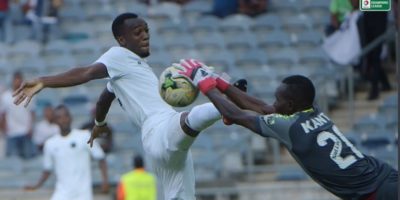