Zesco United will represent Zambia in the 2019/20 CAF champions league tournament after winning the MTN FAZ super league stream A while runners-up in the stream Zanaco will play in the Confederation Cup.

It was a tight race for the top slot with five teams going into the final match-day with a chance to win it. But it was the incumbent champions who took reigned on the day pipping Zanaco and Red Arrows who ended second and third respectively on goal difference but all on 33 points.

Zesco were up against relegation threatened Mighty Mufulira Wanderers and they walloped the visitors 3 – 0 thanks to a brace by Lazarous Kambole who scored on either side of the half to add to a John Chingandu third minute goal.

The Mighty fans had one eye on the game at Sunset Stadium as they prayed for a Prisons Leopards loss to stay afloat and it was positive news for them as Zanaco picked a hard-fought 2 – 1 win over the Kabwe side to condemn them to relegation as the Bankers” soared into the CAF competition.

Chitiya Mususu opened the scores for Zanaco in the 3rd minute but the confident Leopards took the game to the hosts and equalized five minutes later. Leopards looked the more likely to score the winner and had a goal disallowed for handball in the 13th minute but it was Zanaco who reigned supreme with a 72nd minute goal from defender Kevin Owusu who rose high to head home his first goal for the club from a Tafdzwa Rusike free kick.

In Kabwe, it was heart break for Kabwe Warriors, who went into the final game of the season leading the log by a point and having not lost a game in the season. They were beaten by visiting Red Arrows 1 – 0 thanks to an Aaron Katebe 30th minute lone goal. The result condemned Warriors to fourth position on 31 points.

Elsewhere in Mazabuka, Lusaka Dynamos who also had an outside chance of taking a second position were held to a 1-1 draw away at Nakambala Leopards. They finish in fifth position.

Zesco will now face off with Stream B winners Green Eagles who have already sealed the other Champions League spot to determine the overall league winner of the league. They have a chance to win three back to back league titles having won the league the two previous seasons.

« ITS A MASSIVE WEEKEND IN ZSL (Previous News)
(Next News) Balanga: Prison will be back » 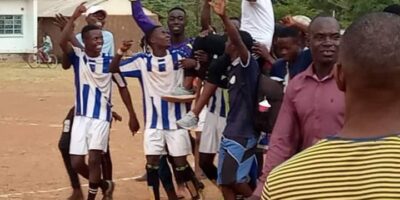