Chipolopolo star striker Patson Daka was on target on Wednesday evening as Redbull Salzburg made easy work of SV Ried is an Austrian Bundesliga League encounter.

Daka started upfront alongside Sekou Koita with Luka Sucic and Brenden Aaronson (who was making his first start) playing on either wing while Zlatko Junuzovic and Mohammad Camara partnered in midfield. Brazilian defender Bernardo also made his first start at left back with Kristensen starting on the right while Max Wöber and Andre Ramalho made up the central defensive pairing tasked with protecting Cican Stankovic in goal.

Zambian Midfield ace Enock Mwepu was rested as he started from the bench. Salzburg dominated from the word go and 15 minutes into the match they went ahead, Kristensen received the ball from the American, Brenden Aaronson just outside the box and slotted it right into the left corner of the net.

Patson Daka had a chance to double the lead but his effort went wide however Sekou Koita doubled the lead with a headed goal in the 29th minute after a beautiful corner kick from Junuzovic Salzburg firmly in control of the match.

Daka who has been in prolific form since the start of last season, made it three at the death of the first half, Sekou Koita with a defense splitting pass to put the Zambian one on one with Sahin-Radlinger who he beat with ease to score his tenth league goal in as many games.

Daka was withdrawn for his much-needed rest in the 63rd minute along with Aaronson and Camara for Berisha, Bernede, and the Computer Enock Mwepu. The Midfield genius had a chance to score as he slid a shot on goal that looked to be going in but sailed a fraction past the far post, 3-0 the match finished.

Patson Daka has now scored 17 goals in all competitions in just 18 appearances with five assists also credited to his name.

Mwepu, Daka up for Sky sports Austria, player of the month 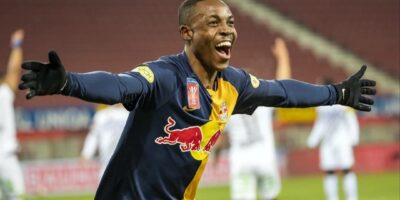 Mwepu nominated for Salzburg player of the month

One Comment to Patson Daka on target, Action for Enock Mwepu as Salzburg butcher SV Ried