?> KALUSHA AND DAMIANO NOT READY FOR THE FIFA MEETING TOMORROW AND ASK FOR POSTPONEMENT | ZamFoot 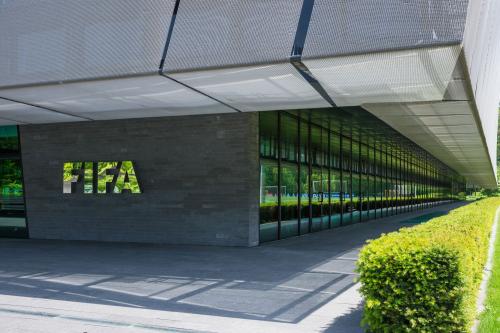 Good afternoon my people and long time. I haven’t been writing because I didn’t feel there was much to talk about.

As is our custom on this wall, I can exclusively reveal to you that lawyers for Kalusha Bwalya, Damiano Mutale, and Patson Lusaka have written to FAZ that they are not ready for tomorrow’s meeting with FIFA and instead request that the same be held on Friday 4th September 2020. The irony is that Damiano demanded this meeting and asked FAZ and FIFA to announce the day “IMMEDIATELY” but when the date is announced he is not ready.

The meeting, scheduled for tomorrow, is planned to be the tail-end of the long-running FAZ-saga that has rocked Zambian football for months and has delayed the presidential elections in FAZ following the disqualification of Kalusha Bwalya as a candidate for the FAZ supremo post.

Damiano and Kalusha’s lawyers Lewis Nathan Advocates yesterday wrote to FAZ General Secretary Adrian Kashala notifying them of their predicament and also seeking clarity on the FIFA conditionality that only 3 representatives of all those who have issues with FAZ governance or have been barred from elections can attend.

“Our clients’ position is that the notice for the meeting is too short. We propose that the meeting be moved to later in the week specifically Friday, 4th September 2020, or any Other date in the following week at the same time. We hope we can be accordingly indulged,” the letter states. “Further we seek clarity and elaboration as 10 the meaning of the three (3) representatives of the “alleged aggrieved parties”. You may wish to note that we are officially on record as representing Mr. Kalusha Bwalya, Damiano Mutale, and Mr. Patson Lusaka who took their grievances to various adjudicatory bodies but which matters were withdrawn to give chance to the anticipated meeting with FIFA. It is important that attendance criteria are clearly outlined.”

For the first time, I was about to avoid giving a background since muma dandaula that my articles are too long. Anyway, on second thoughts let me do what I always do.

Three days ago, FIFA announced through a letter to FAZ that it was set to meet the Football Association of Zambia (FAZ) and the aggrieved parties (over issues surrounding the 2020 FAZ elections) via a video conference call tomorrow Tuesday 1st September 2020. The letter dated 28th August and signed by FIFA Chief Member Associations officer Véron Mosengo-Omba detailed that the meeting would have representatives of the alleged aggrieved parties, the Ministry of Sport, National Sports Council of Zambia, and FAZ.

“With reference to our letter dated 31st July 2020, we propose to hold a video conference on 1 September at 10 am (Zurich time) with the following participants: FAZ representatives
Ministry of Sport officials, National Sports Council of Zambia, and Alleged aggrieved parties to the ongoing electoral process (maximum of three representatives).

The letter proposed an agenda where the Sports Council and the Ministry of Sports would make their remarks then the aggrieved parties would present their case with FAZ bring given a chance to answer to the allegations before FIFA can give its verdict on the way forward. The FIFA decisions in this meeting with put paid to all the wrangles that have destabilized the electoral process as the decisions will be final and binding on everyone involved.

The FIFA letter was partly in response to the demand made by Damiano on 8th August 2020 through a letter that was received by the Ministry of Sports on 10th August. 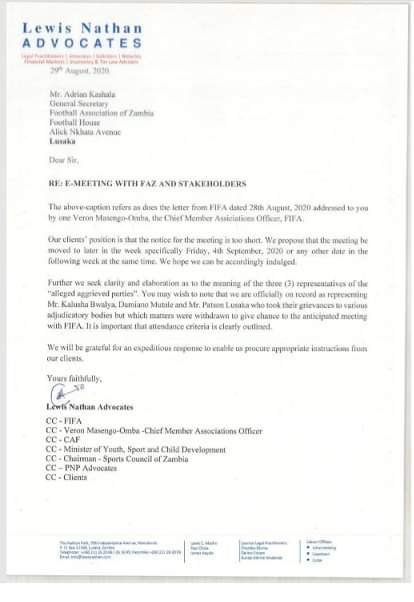 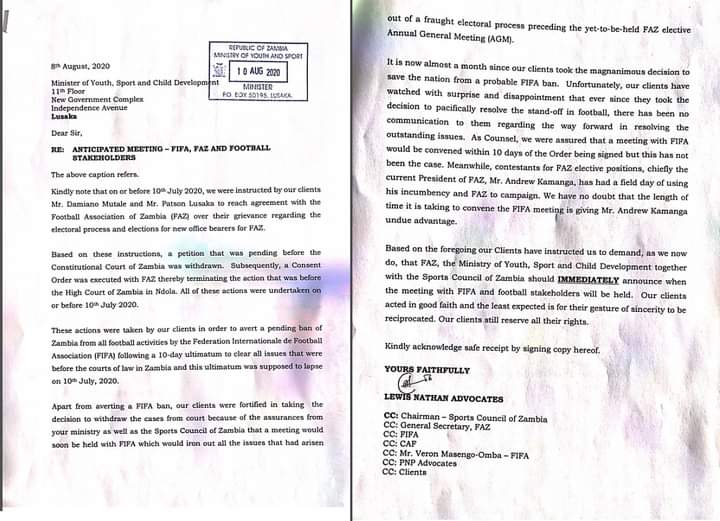 MY ANALYSIS AND CONCLUSION

So, the meeting may not take place unless FIFA insists that the meeting goes on tomorrow.

In looking forward, I have already said many times that Kalusha Bwalya won’t be on the ballot paper when FAZ elections continue in the next few weeks or months. But I get insulted when I say this even though the collapse of his case at CAS means nothing else. With the Damiano case now over, it means football can get back to normal politically.

Damiano and Kalusha people have been looking towards FIFA officials holding the video conference meeting hoping they can cancel the current electoral process and start the process afresh. But that can’t happen for two reasons: 1. There is no legal basis for FIFA to intervene in disputes as FAZ statutes only recognize the Court of Arbitration or CAS. 2. In my first article, and the next two, I insisted that Kalusha should have administratively written to FIFA to get clearance from the Independent Ethics Committee of FIFA so that he knows if he can stand or. His supporters said I was just a Facebook lawyer and knew nothing. But they are now back putting all their hopes on FIFA months later. Oko usulile ekoopa noko. It’s too late now.

In reality, the meeting to be held tomorrow or Friday shall be a formality. Kalusha will not be on the ballot.

Remember also that the same official Damiano wants to favor is the same one he called into contempt and threatened with arrests. 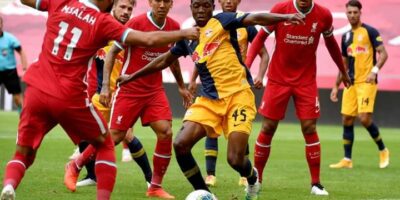 Zambia wake up and do the right thing, You have too much talent

Talent is an exceptional natural ability in a particular activity that comes without training, itRead More 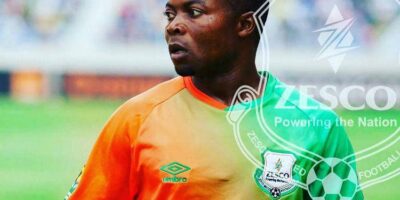