?> Futsal: Zambia to fight for last WC slot after loss to Egypt | ZamFoot

Futsal: Zambia to fight for last WC slot after loss to Egypt 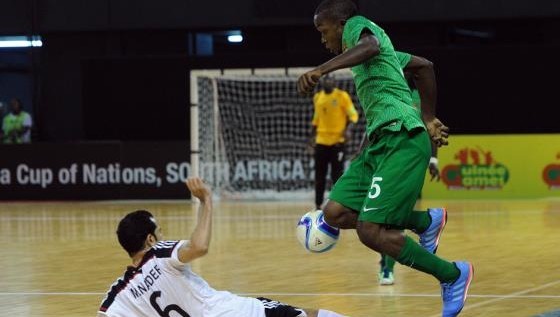 Egypt maintained their unblemished record of qualifying for every edition of the FIFA Futsal World Cup since 1996 after a hard fought 5-4 win over Zambia on Friday at the Ellis Park Indoor Arena, Johannesburg.

The Pharaohs will be the first to admit that the ticket to Colombia and a place at the final did not come on a silver platter as they had to survive a late scare from a very determined Zambian side.

The North Africans comfortably led 4-1 at the break but the second half fight back from the Zambians left Egypt coach Hesham Hussen and his backroom staff sitting on broken bottles for the last five minutes of the game.

By the 13th minute, the three-time African champions were up by three goals thanks to a hat-trick within two minutes by Mostafa Mohamed before Elmoatazzbellah Abdelhalim ‘Mizo’ scored the fourth on 17 minutes.

Boniface Ndhlovu pulled one back for Zambia on 19 minutes to launch their comeback just before the break.

Egypt held on to claim victory and a place in Sunday’s final against Morocco whilst Zambia will face Mozambique for the continent’s third and final ticket for the FIFA Futsal World Cup in the third place match same day.

Just as the season is getting closer, there is a small matter of a communityRead More

7 Comments to Futsal: Zambia to fight for last WC slot after loss to Egypt