?> From the streets of Siaya to the home of Zambian Champions - The story of Ian Otieno | ZamFoot

The Zambia Super League has grown tremendously over the last few years and has become very attractive to foreign players. East African players make up a huge portion of the foreign talent in Zambia.

Kenyan goalkeeper, Ian Aubrey Otieno is one of those who have found a new home in Zambia. Otieno has been in Zambia since 2018 January when he joined Zambia Air force sponsored outfit Red Arrows from AFC Leopards in the Kenyan Premier League.

The former Posta Rangers goal minder signed for Zesco United from the Airmen on a three-year-deal in January and has gone on to become a regular in coach George Lwandamina’s starting XI, replacing club legend Jacob Banda and has featured seven times, managing to keep two clean sheets and conceding six goals.

The ZamFoot Crew met up with the 26-year-old to discuss his football journey so far.

Otieno revealed that he started off as an on-field player, playing on the wing and only switched to being a goalkeeper later on after his team’s goalkeeper conceded a nutmeg goal and furiously decided to leave the pitch.

“My Love for football comes from a very young age, The day I started kicking whatever I could kick, growing up in Ruiru Nairobi football was all I Loved, started off as a number 7. Then one day we where playing in Ruiru then our goalkeeper conceded a nutmeg in response he gave up and left the field, I gave it a try and I actually never looked back,” he said.

“At the age of 12, I joined Ujuzi Soka Academy, from Ujuzi I went to school where I perfected the art of Goalkeeping, played school football for 4years, then I joined Strathmore University FC. Then Amiral Fc signed me in Coastal Kenya, played there for two years and joined Posta Rangers because they offered me a Job, from there AFC Leopards came calling and I could not resist.I became a better player at AFC Leopards grow as a player mentally and emotionally. I then got an opportunity to come and try in Zambia at Red Arrows football club..where I spent two fantastic years and moved on to Zesco United where I am now,” he added.

Otieno says he had a tough time when he first came to Zambia because everything like language, food and culture was new to him.

The Zambia Superleague is currently on halt due to the Coronavirus epidemic but their indications that it will return next month and the Kenyan goalkeeper is eagerly counting the minutes until he is back on the pitch.

“My time in Zambia has been wonderful, at first it was not easy coming to a different country, the language, the culture and the food all new to me,” he said.

“I can’t understate the eagerness to get back to action, and help Zesco United win the double the league and the ABSA cup,” he added.

Otieno is rated very among the top three goalkeepers in the MTN/FAZ Super League and in the past has expressed his desire to take up the mantle to be Kenya’s number one goalkeeper.

Sharing is caring! Click on the icons below to share with family and friends.
Exclusive Interviews 2 Comments » 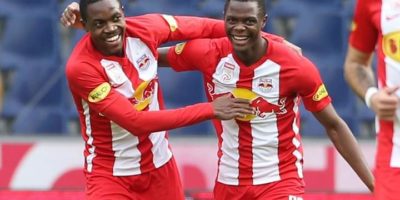 The boys have been exposed enough- William Njobvu

In the country currently, there is a debate on whether Austrian based duo of EnockRead More