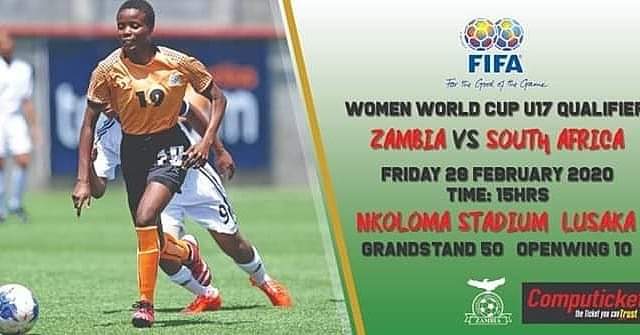 Zambia Under-17 Women’s national team will this afternoon renew their rivalry with South Africa in the India 2020 FIFA Women’s Under -17 World Cup Qualifier Match first round first leg slated for Lusaka’s Nkoloma Stadium with Kick-off at 15:00hrs.

Both sides are going into this match with nothing other than a victory on their minds as they aim to stamp authority on the two-legged tie.

Speaking in a pre-match press briefing ahead of this afternoon’s game Zambia Under-17 head coach Kaluba Kangwa said the team is ready and people should expect an entertaining game with great results.

“We have prepared extremely well for this game, the morale is hard in camp and everyone is looking forward to the game and you should expect a very good and entertaining game as well as results and passion from the girls,” Coach Kangwa told the ZamFoot Crew.

His South African counterpart Simphiwe Dludlu said she expects a tough match but she is optimistic her lasses will pick up a positive result.

“Playing Zambia, is never an easy task, we may have beaten them in the Cosafa before but this will be a different game, they are a very strong and physical side and playing at home the crowd is always with them but all we want to do is put up a great performance,” Dludlu said.

Yasa Queens goal minder Ing’utu Muchahabali is likely to be in between the sticks for the Junior Copper Queens and providing her with cover is a four-man wall in defense led by Choma Warriors defender who is the captain of the side Esther Siyamfuko will alongside Martha Banda, Margaret ‘Kabotolo’ Nyambe and exciting Patricia Mumba.

Either Shelly Masumo or Esther Banda is expected to anchor the middle of the park while Tisilile Lungu and midfield genius Maweta Gloria Chilenga will make up the midfield.

Edah Lungu could also be given a starting nod in the midfield.

The striking pair of Florence Kasonde and Dorica Malunga will have to inspire the team to victory by being clinical in front of goal another option for coach Kangwa is Precious Nsama.

On the other hand, Zubenathi Livi may start in goal ahead of Rosalie James for Bantwana.

Leading the defense could be Mihle Lumko alongside Yolanda Nduli while Jessica Wade and Nelly Gamede may orchestrate the Midfield.

However, there are some players who will be making their debut appearances for the team whom coach Dludlu will also be counting on apart from giving them exposure at the International stage.

The Junior Copper Queens will travel to South Africa on 14th March 2020 for the return match to determine who progresses to the next round.

The winner between Zambia and South Africa over the two legs will face either Zimbabwe or Botswana in the next round in May to continue their pursuit in the India 2020 FIFA Women’s Under 17 World.

Charges for this match has been pegged at K50 VIP and K10 all round.

Sharing is caring! Click on the icons below to share with family and friends.
Women's U-17 National Team No Comments » 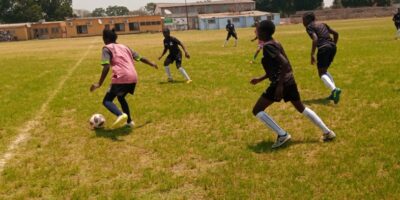