The 2018 COSAFA Under-17 Championships get under way on Thursday as Mauritius plays host to the vital junior competition for the third year in a row.

This year’s regional tournament has added significance as it serves as a qualifier for the 2019 African Under-17 Championships, which in turn will supply the continent’s four representatives at the FIFA Under-17 World Cup in Peru next year.

So the COSAFA event, which runs from July 19-29, will be the beginning of the road to the global showpiece for the 12 competing teams from the region, who all have set their sights on winning a place on the big stage.

The competition will be played at two venues in Mauritius, the St. François Xavier Stadium in Port Louis and Stade Anjalay in Belle Vue.

There will be three matches on the opening day on Thursday, all in Port Louis, starting with a Group A clash between 2016 winners Namibia and the Seychelles at 10h00 (06h00 GMT).

Namibia return after missing last year’s competition having surprised many to take the title two years’ ago, and will be fierce competitors once more under coach Paul Malembu.

The current holders Zambia will open their 2018 campaign with a tricky Group B tie against Mozambique, who narrowly missed out on the semi-finals last year on goal-difference. The match will kick-off at 12h30 (08h30 GMT).

The young guns arrived on the Indian Ocean Island on Sunday

Zambia are arguably the pre-tournament favourites, having always provided a competitive edge at all age-group levels in the COSAF region. But the Young Mambas will know they have it in them to spring a surprise and beat Zambia last year in the pool stages.

Hosts Mauritius, who were beaten finalists last year, begin their bid for the title with a Group A clash against Botswana in the final game of the day at 15h30 (11h30 GMT).

It will be crucial for both sides to get off to a winning start if they are to make a bid for the knockout rounds.
Only the top side in each group, as well as the best-placed runner-up, advance to the semi-finals.

Group B also contains South Africa and Lesotho, while Group C is made up of Zimbabwe, Angola, Malawi and Swaziland.

Matches during the tournament will be broadcast live on Kwese Free Sports across Africa: www.kwese.com/channel/kwese-free-sports/ 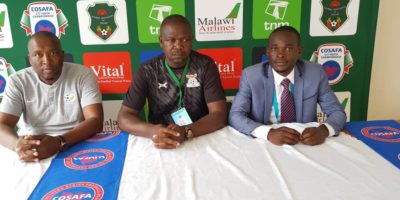 One Comment to Cosafa U17 Championship Preview: Young guns ready to defend title