?> Col Katoba opens up on her plans for Women's football | ZamFoot

Col Katoba opens up on her plans for Women’s football

Football Association of Zambia (FAZ) Women’s national representative aspirant, Col Priscilla Katoba has opened up about her intentions when voted into power at the FAZ elective general meeting.

Col Katoba is the founder and CEO of Kabwe based Women’s club Queens Sports Academy, She is the President of Green Buffaloes Women Football Club and also the Director/Co-founder of Rising Star Sports Academy.

She is keen on investing in human resources both at the district and national level. Col Katoba is also keen on education for the players and is eying collaboration with the ministry of education.

“Most of the time when we are campaigning we make promises and fail to fulfill them when voted in but I prefer the work does the talking for me,” she said.

“Human capital is important so we need to all get involved not just women representatives but all provincial leaders to have different courses from districts for Officials, coaches, players. Entrepreneurship for all persons involved in the running of football not just women but all in collaboration with schools through ministry of education,” she added.

In her six-year tenure as Green Buffaloes Women’s football club President, she has helped a number of girls pursue their Education and was involved in Memory Phiri going abroad on a Sports Scholarship at a reputable Oklahoma University in the USA pursuing a Degree in Medicine.

Col Katoba went on to echo her earlier sentiments on the creation of a national Women’s League as the country currently only has provincial leagues. 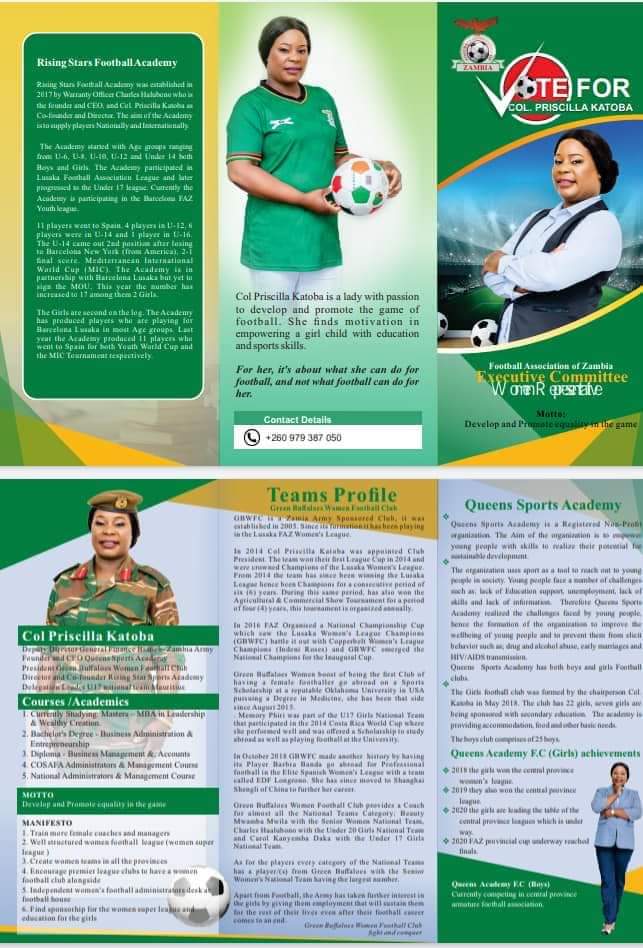 The Queens Academy proprietor also went on to outline her plan on how to get sponsors on board.

“All the women teams which are at least sponsored should play in the national league for advertisement purposes and try to get at least a few games televised. Green Buffaloes, Red Arrows, Yasa, National Assembly, Green Eagles, Indeni Roses, Zesco Girls, Nkana Queens, Nkwazi Queens. These can start a super league,” she said.

“Provinces will start with district leagues even few teams and move to provincial playoffs and the winners we will now play a National Team either under 17 or under 20 from provinces, not every time Lusaka so that the girls, parents, and chiefs in those provinces can be encouraged to come onboard support girls soccer.”

We must engage the Ministry of Gender, Office of First Lady, Female MPs, and Female Ministers as well as business houses for sponsorship.

“Gender equity activism is key to national development, If all make contributions then work will be easy. Media to be used, let the women give life experiences to indicate the value of the sport in their lives, We have qualified to the world Olympics so it’s the right time to get everyone involved.”

Heart to Heart with Precious Moonde: A girl balancing football and school

Born and raised from a small town of Mazabuka in the Southern part of Zambia,Read More